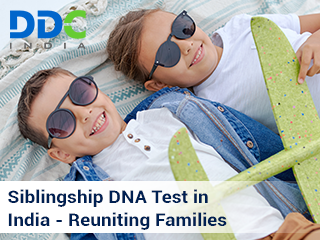 Siblingship DNA Test helps determine whether two siblings are related or not, i.e., brothers/sisters. In addition, it also gives an estimated idea about whether two siblings share one or both biological parents. Sibling DNA testing is one of the most commonly used DNA tests in India for peace of mind. At DDC Laboratories India, we are providing 100% accurate DNA test reports for siblingship relations at the best prices.

Sibling DNA Testing report gives ‘Siblingship Index’, unlike other relationship DNA tests, where the DNA test report is measured only in terms of match percentage between two DNA profiles. Siblingship Index less than 1.00 means the alleged siblings are not genetically related to each other, and if it’s greater than 1.00, both are biologically related.

Sibling DNA testing can be done in the following two different specifications, depending upon the type of information required:

In each of the above, the DNA patterns of the alleged siblings are compared with those of the alleged father to establish a Siblingship relationship. With the mother’s participation, we are able to exclude the mother’s DNA for a conclusive test result. If the mother is not available, the tests become more exhaustive, and a deeper analysis is needed. However, it doesn’t affect the accuracy of the Siblingship DNA test result.

At DDC Laboratories India, we prefer buccal swabs to the DNA sample collection. It’s an efficient, spill & damage-proof mode of sampling. Buccal swabs can be stored for longer durations of time before carrying out the test.

For sample collection, the swabs are rubbed inside the cheek walls to collect the epithelial cells of the mouth. From these cells, the DNA will be extracted and studied. The same process is repeated for both of the alleged siblings.

Methodology of a Sibling-Ship DNA Test

Sibling DNA testing is carried out in two different steps. The first one is STR profiling, and the second one is matching the DNA markers against the population database. We carry out the DNA analysis of two alleged siblings independently. Siblingship Index is calculated from the genetic profiles to confirm their relationship as brothers/sisters.

In the STR profiling phase of a DNA test, the DNA samples of the alleged siblings are collected. Following the collection, the DNAs are broken down into small fragments of repeating DNA sequences. These fragments or sequences are called STRs -Short Tandem Repeats.

After this step, the STRs are amplified to produce multiple copies of the same. This process is carried out via Polymerase Chain Reaction or PCR and is repeated for both the DNA samples of the alleged siblings. Following this step, the DNA Profiles are studied and compared to find a match.

In the second phase, specific markers of the two DNAs are matched against a population database. The least the number of DNA markers matching with the database, the more distinct and unique the DNA profiles are.

Our customer service representatives can guide you on which types of Sibling DNA Testing you should go with. A Siblingship DNA test can also be done for establishing family relationships where an alleged father or an alleged mother may not be available (for a Paternity DNA Test or a Maternity DNA Test). The outcomes of Sibling DNA testing may be beneficial for inheritance claims, Aadhar/Ration Card entries, government schemes, etc.