Bangalore is among the most progressive cities in India, blessed with a year-round balmy climate. It is also known as Garden City, Pub Capital, Silicon Valley, and the Start-Up Capital of India offering class-leading and internationally recognized services in various sectors. Similarly, if you are looking for a DNA Test in Bangalore & nearby areas, we can help!

Steps Involved in Getting a DNA Test in Bangalore

DNA testing begins with the collection of samples from the parties involved. A buccal swab is used for this purpose, which collects epithelial cells from the mouth. Later, the cells are isolated, and the DNA is analyzed.

It is then followed by short tandem repeats or STRs profiling. The resulting STRs must then be amplified by Polymerase Chain Reaction (PCR).

The final step is the capillary electrophoresis which generates a unique DNA profile. Despite all humans sharing 99.9% of the same DNA, the mere 0.1% variation is what makes us all unique.

If you are looking for a DNA Test in Bangalore with accurate and dependable results choosing the best lab is the way to go. While searching for the best DNA Labs in Bangalore, you should ensure that they follow all the industry standards for their DNA Tests and are offering the best DNA test price in Bangalore.

We offer a range of DNA tests for various purposes. You can purchase a DNA test online based on your needs. At DDC Laboratories India, you can get the desired DNA test in Bangalore at competitive prices. However, the DNA Test Cost in Bangalore can vary depending on its specifications.

The DNA test cost in Bangalore and India is a bit on the higher side due to the sophistication of the technology used in the testing and the details this test reveals.

Why DDC Laboratories India For DNA Test in Bangalore?

At DDC Laboratories India, you get authentic, 100% accurate, and reliable DNA Tests in Bangalore. We have an excellent track record of successfully providing accredited DNA testing services in India and abroad for many years. In addition, we offer the best DNA Test Price in Bangalore, and India, making our tests affordable & accessible for everyone.

We are the only DNA Labs in Bangalore providing accredited Immigration DNA test, for example-

Our lab is accredited by the CLIA (Clinical Laboratory Improvement Amendments) and ANAB (ANSI-ASQ National Accreditation Board) for Immigration DNA tests in Bangalore and India.

Here’s what makes us the best DNA labs in Bangalore: 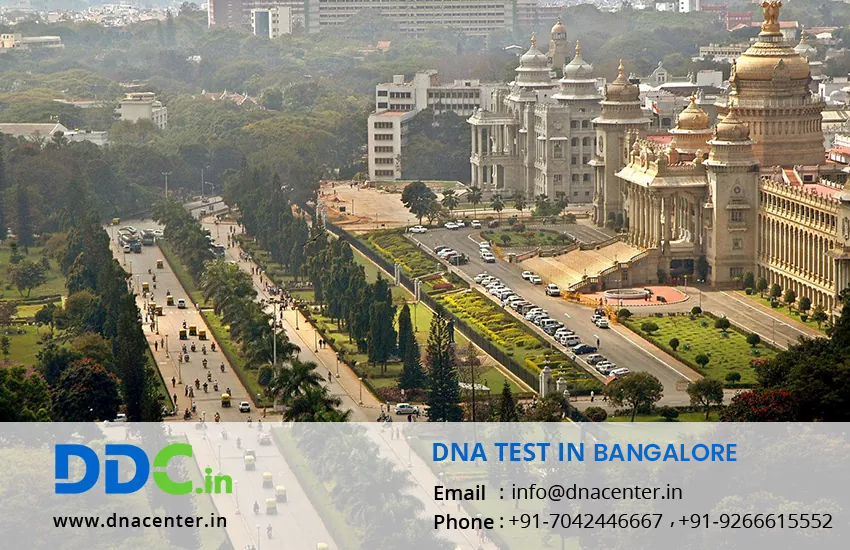